Case Study 2: The Use of an Offshore Finance Holding Company

Let’s take the example of an Israeli entrepreneur who is ready to open a branch in the Czech Republic. A significant part of this project will be financed by a loan. This newly-created branch is therefore obliged to refund the annual loan payments to the parent company.

Due to the double agreement between the Czech Republic and the State of Israel, the Czech Taxation System imposes a withholding tax of 10% on the interest payments of Israeli non-residents. 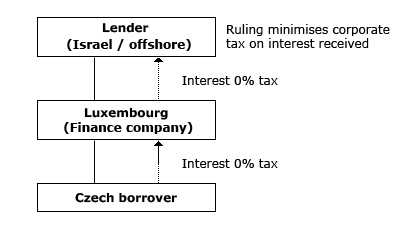 What concerns the Israeli taxation system, the interest received by a company will be subject to 36%.

In order to optimize the return on his investment and especially his operations, the Israeli investor wants to avoid the withholding tax imposed by the Czech Republic at all costs.

What legal and tax advice can we give on using, if possible, an offshore company?

What is the most suitable legal and tax structure for this situation?

The best solution for the creation of an offshore company:

In the case of the Israeli investor, the best way to succeed in the international fiscal optimization is to use a ‘back to back loan’, as well as to create an offshore holding company in Luxembourg.

Furthermore, it is possible to negotiate a tax agreement with the Luxembourg tax authorities in order to reduce the tax rate imposed on the earnings of the holding company based in Luxembourg.

Finally, the Luxembourg tax system envisages that the interest paid outside its borders is not taxable, and this applies to all the jurisdictions listed as tax havens.

Our recommendations for offshore tax optimization:

Of course, all the financial operations and the loan repayment will be carried out by the company that has been relieved of the withholding tax. Thus, only the Israeli tax (in the amount of 36%) will be imposed on the interest received by the parent company.

The Israeli investor can always enjoy a more profitable tax position by submitting an investment project in another offshore to us.